The liberal economic policies and low taxes applied by the PP in Madrid without interruption for more than 25 years have increased the weight of the region in the destination of foreign investment in Spain. Concretely, from 2003 to this year, Madrid concentrates 57% of international investments in the country. In this third quarter of 2021, the region received 73% of the national total: 4,438 million euros out of the 6,058 million received in the country.

This shows that the region is gaining in weight, dynamism and attractiveness for international investors. As the graph shows, the average investment received by the region from 1993 until today is 56%, thanks mainly to the surge shown since 2003. Between 1993 and 2003, the average recorded in Madrid was 52%. . 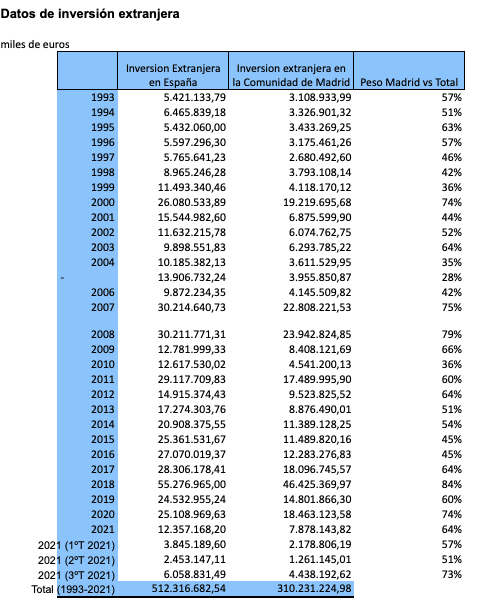 And another data: the annual growth of investments was 3% in the case of the national average, while the Madrid average is almost half a point higher, at 3.4%.

In the midst of these very positive figures for the region – the PP has governed without interruption since 1995 – the liberal policies now applied by Isabelle Diaz Ayuso, regional president, are in danger due to the government’s threat to force all the autonomous communities to apply the same tax policy.

The PSOE calls it tax harmonisation, but in reality for Madrid it would mean having to raise taxes for locals and reduce the region’s attractiveness to foreign investors. Especially with regard to inheritance and gift taxes, which in Madrid are practically cancelled.

This has led leaders of other regions, such as Catalonia or Valencia, even the Basque Country, which benefits from a special regime, to accuse Madrid of being a tax haven and of practicing dumping tax.

Just as the regional government has just canceled all regional taxes, making it the only region in Spain that does not have its own taxes, compared to the 17 suffered by Catalans.

Economic globalization has developed alongside the growth of transnational trade. As different countries have different interests and with ever-changing power relations, negotiation and cooperation are essential. Directing critical decision-making towards mutually beneficial agreements is international economic policy. In the meantime, understanding these agreements can help public, private, and nonprofit organizations—in disciplines ranging from business and […]

Author: Kannan Reghunathan Nair, NTU and Phan Xuan Dung, Pacific Forum Since the upgrade of bilateral relations to a “comprehensive strategic partnership” in 2016, the strategic coordination between India and Vietnam has steadily deepened, as evidenced by the strengthening of maritime defense and security. . Cooperation. But economic ties between New Delhi and Hanoi are […]

The managing director of the IMF and the president of the World Bank both expressed concern over growing global economic inequality on Wednesday after a second day of spring meetings of their organizations. An unprecedented political response and rapid vaccine development helped pull the global economy from the brink last year, but the outlook is […]